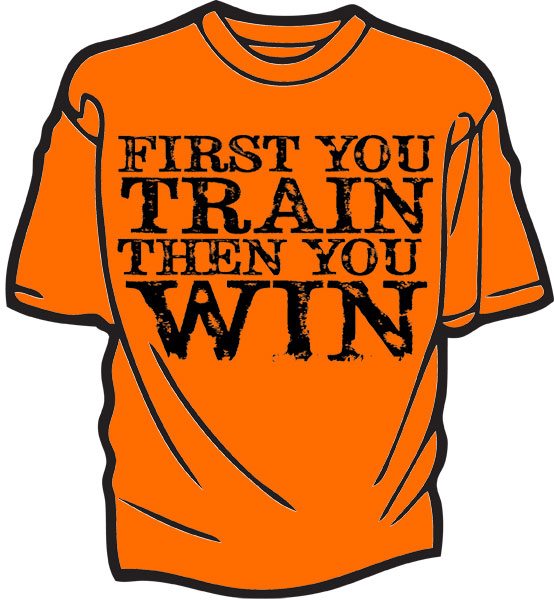 Think outside the box. This t-shirt was slated for 1 color, text only, and I only had 20 minutes because of a client-imposed rush deadline.

It isn't hard to be more creative.

“Sometimes the questions are complicated and the answers are simple.” ~Dr. Seuss

Be more creative with Creative Problem Solving - 5 minutes to 50 ideas.

When I teach a class or creativity workshop, I lead a lesson on generating the perfect slogan for a billboard or t-shirt. I begin by giving the students some excessive amount of time to come up with a great slogan. Often, the response I get in the next creative session is, “I couldn’t come up with anything good.” When the ideas are due, I listen to them. Sometimes there is a great idea, but that’s rare. The magic is in what we do next. They learn to be more creative in 5 minutes or less.

I then have my students take out paper and set a kitchen timer five minutes. I tell them that they now have five minutes to come up with 50 ideas.

If you really want to be more creative

The results, each student has at least one slogan on their list that is better than they originally created. When you consider the power of the “group” brainstorm, a room that previously had 20 ideas total for 20 people, now has 400 ideas to choose from.

The creative problem solving process that works for me.

The Zen of Creative

There is no special breed of person that’s meant to be more creative than another. We are all creative.

You have to think of yourself as creative. I promise you are. Start noticing when you think of creative answers to things. We started out creative as children. Somewhere along the way, we began to think we weren’t creative. Stop thinking that. If you can get past your limits of thinking, your creative ideas will get better and better.

There are no limits.

Stop limiting your thinking about whether you can pull off an idea; it can be done. If it’s worth it, you’ll find a way. Remember you don’t always have to do it yourself.  For designers who need an illustration but cannot draw, several freelancer sites will hook you up with someone who can draw for you. Or maybe you are building a website, and you don’t know how to code, but have a great idea, these same freelancer sites will connect you with someone who will do it within your budget.  You don’t have to do it yourself; it’s like a vending machine.  Pour cash in the top and your idea pops out the bottom.  Just remember, if you cannot do it yourself, it’s automatic.

Every problem worth solving has an emotional center. It has a true nature. If you are working for a client on an ad campaign, the true nature of the problem is that the client wants more response to their ads. The emotion the client wants to experience is joy from selling something. The emotion of the end-user will vary from product to product. If you are trying to sell car seats for toddlers, the end-user emotion is trying to avoid fear and to gain style/comfort/safety for their kid. Everything is motivated by the pursuit of pleasure or the avoidance of pain/fear.

“Shoot it on the nose” as they say in the film industry. Remember why you’re doing this project. What is the central problem you’re trying to solve? Do you need people to click an ad? Do you want a reader to laugh or cry from your words?  Think about the purpose. Close your eyes. Try to see it from your end-users perspective and think, “what would make ME click that ad?”

Can you do a quick favor?

×
The information you enter here will be sent directly to the recipient. It is not stored on this sites database. Read more in our Privacy Policy
SEND